the dogs you have known
Laurie
2045 Hits
0 Comments 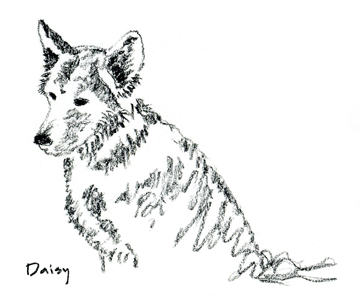 You know how some people say they have "the greatest dog in the
world"? Well believe it or not, I had one. Her name was Daisy and
she was a mutt. I say that in the kindest way. Over the years we
decided she was a Spitz type breed - maybe Husky with Golden
Retriever, and Collie mixed in. As a puppy she looked exactly like a
Golden, but by the time she was a few months old, her ears pricked up
(of course not at the same time) and we had a beautiful apricot
colored Husky-type dog.

I wasn't the only one to notice how pretty she was. On our walks,
people would admire her. "Beautiful dog" they would say, "what
is she?". I always had the same reply - Husky/Retriever/Collie.
But that was only my best guess.

We met Daisy on a fluke. I wanted to get our little girl (she was all
of 2) a puppy for Christmas. Now that I look back, I wanted a puppy
for Christmas. I had a small Poodle growing up - she was a nice dog,
just not the dog I thought I should have. I wanted a dog that would
wrestle, play Frisbee, retrieve anything that was thrown and
generally run around a lot. I wanted a dog that would go hiking,
accompany me on errands and visit friends and their dogs. I lived in
Colorado and having a dog that traveled well was important to me. It
would be fun - driving around in my convertible, cd playing, our
hair (or fur) flying in the wind.

The first day we saw Daisy, she was with a litter of 9 that came from
5 different sires. Her brothers and sisters ranged from terrier mixes
to spaniel mixes and everything in between. She was a cute ball of
golden fur. My first question - how big would she get? At that first
meeting I thought she would grow to be a 65lb. Golden Retriever.
Floppy ears, sweet face, the works. But I was wrong, she was so much
more.

It was a Saturday and we were making the rounds to the local pet
shops looking for a puppy to adopt. After three stops, we decided she
was the one. After all - every store we visited, Daisy was there
along with her brothers and sisters. Her caretakers were making the
rounds too. We figured it was fate, so on went the collar and out
came the checkbook. We had our dog.

I always described Daisy as having manners. Because she did. Even as
a small puppy she would patiently wait by the door to go out. No loud
barking, she seemed fine with waiting her turn, not wanting to
disturb you. She didn't jump, drool, lick, or bark excessively. How
polite we thought. I got use to having a well mannered dog, and so
did my friends. Wasn't everyone's dog like this? I'm sure part
of this was due to the fact I worked out of my home. We did
everything together, she was my companion. Our days included a long
walk with an off leash romp near a stream. Definitely a "dog's
life". Daisy was content and so was I.

Yes, Daisy was my best girl. She was smart and gentle and a joy to
have in our family. She lived until she was 11. Not long enough for
any of us, especially me. Now my daughter is a teenager, my son is 10
and we have decided to take a chance on another rescue dog.

After looking on-line at shelters all over the country (is Sacramento
to far to go for a dog?) I decided to work with a Collie rescue group
in Ohio (only three hours away!). They had 7 Collie puppies they were
rescuing from a shelter in Kentucky (the pups originally came from
Arkansas)-and two were headed to Ohio - did I want one? They sent
a photo and we were in the car the next day to get our new pup. 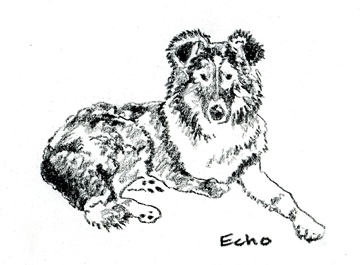 Echo is a year and a half now, he is sable and white and looks more
like a Farm Collie than a huge fluffy Collie. He's small as far as
male collies go - only 45lbs. - the same size as Daisy. He's a
stinker - a barker (by design), likes to jump (often with all four
paws in the air), a nipper (herding is in his blood), a licker (is he
part cat?), has a potty mouth (toilet water - yum!), is afraid of the
lawn mower, vacuum and blender, loves to nip at bare feet, is
relentless when he thinks it's playtime and not quite as polite as
my girl, but I guess there's time. What he is -  is sweet, full of
energy, great on a lead, super at playing fetch, has mastered a few
tricks, great with the kids and is learning agility.

Daisy was my best girl and I hope I had something to do with that. So
now it's Echo's turn - who knows maybe someday Echo will be my
"best boy". 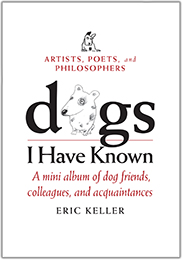 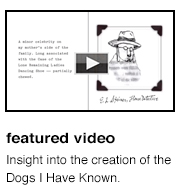 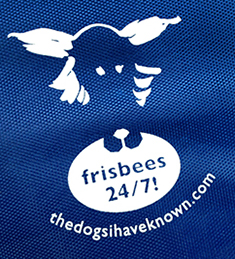